I am pleased that you have found me and want to learn more about me and my way of working!

The opportunity to know you better and to be blissful with you is essential in my therapy. With a lot of empathy and intuition, I guide you to more clarity and light-heartedness in all areas of your life.

Together we will work on old programming, conditioning and recurring, often painful patterns. We can now observe our behaviours in order to transform them and come into a new positive state of being.

It is important to me to bring you into contact with your body and your inner wisdom, because then you can make your own decisions and remember your true self again. Thanks to my cross-method experience, I can quickly see what is behind your problems.

My method takes a holistic approach; mind, emotions and body are different aspects of a person that should be in harmony, so that you can feel peace and serenity. Your social environment and spirituality are also important factors for your emotional health! This change should come from inside with the aim of becoming permanent.

As a psychotherapist and counsellor, I’m near you with all my knowledge.

I would describe my personality as sensitive and empathic. I can motivate you to take your life into your own hands, to take difficult decisions and to take responsibility for your own actions. I would like to inspire you, help you to achieve clarity and to live your full potential, fulfilled and in balance.

Born and raised in Germany, I bought my first yoga book when I was 16 years old. This was my first contact with Eastern philosophy and its body and breathing techniques. My discovery years began at the age of 18. After living in Portugal for 3 years, I travelled through Spain and ended up in Tarifa. Since then I have been at home here for over 30 years now and have three grown up children.

I worked as an independent entrepreneur for ten years. This led me to study psychology in addition to work and child rearing. In 1992 I had a spiritual awakening that gave me the strength to work steadfastly towards my goal. It soon became clear to me that only studying psychology would not give me the knowledge and answers I was looking for. I only received answers when I studied systemic therapy and Gestalt therapy. As a result, i began to work on myself. I realized how early childhood experiences shaped me and that my decisions were not made freely, but were based on my repetitive patterns on autopilot. During the gestalt therapy training and my own therapy I was able to untie a lot of knots, recognize established structures and practice new behaviours. Systemic therapy deepened my view of the dynamics that have been repeated in my family for generations. I realized the importance of family and roots, which I often denied before.

After that I worked as a “tutor” in Gestalt therapy for a four-year training cycle. I had the opportnity to observe the interventions of therapists and clients, write them down and was a constant companion for a group of 20 people. I had the same task for 3 years during systemic training. This time I learned to listen carefully and was able to observe directly the interventions of the many experienced therapists. This time was extremely important for my current work because I was able to watch these people develop. I was able to carefully study the patterns, avoidance behaviour and difficulties that arise during the therapeutic process. I had the privilege of studying with Ramón Resino in the “Aula la Montera” in Seville and then practicing in his school. During this time I also worked intensively on the Enneagram. I became familiar with the Enneagram, as Claudio Naranjo teaches it, and was able to learn directly from Bert Hellinger´s Family Constellation work. Since 2009 I have also been working as a psychotherapist and facilitator in Cádiz in the “Centro Syam”, now I lead groups and courses myself.

I practice yoga and meditation, have travelled a lot and my spiritual development is very significant to me. Health and nutrition are one of my big interests. I can only confirm that a healthy mind is part of a healthy body. Over the years I have acquired a lot of knowledge and can share this experience with you.

State-approved health psychologist, member of the Chamber of Psychologists with the number AN-06066.

EUROPSY, European accreditation certificate as a specialist in psychotherapy, registered in the clinical and health sectors.

Recognized psychotherapist, supervisor and trainer of the Spanish Association of Psychotherapy (FEAP)

Titular of the Association of Gestalt Therapy (AETG).

Full member of the Association of Systemic Therapy.

In-depth training in Gestalt therapy as a tutor (4 years, it is a repetition of the entire training as an observer and responsible for the group).

In-depth training in systemic therapy as a tutor (3 years).

Many hours of professional supervision and own psychotherapy process.

1987 – 1997 self-employed in commercial and restaurant sectors

2008 – Private practice as a psychologist and psychotherapist in Tarifa.

Everything that I learnt is integrated into my work and enables me to accompany people who are going through difficult times in their own lives or who wish to grow as a person. I would like to thank the many people who have accompanied me on my way, supported me in my work and who have put their trust in me. 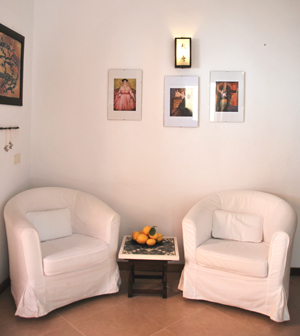 It is important to me to offer a confidential and protected space in which it is easy for you to open up.

It is a pleasure to work with you and to contribute to your personal development.